In this project, the number, area and shape of armor plating is measured as a continuous trait using a combination of threshold, watershed and edit_contour. 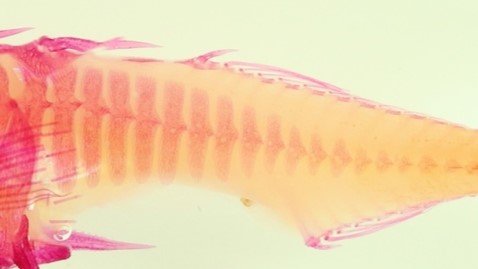 Input - Stained threespine stickleback. The size of plates at a given plate index varies within at between ecotypes (e.g. lake and stream morphs) 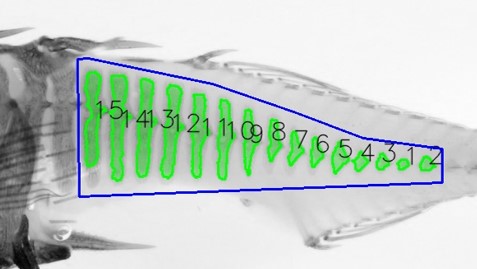 Results - After applying adaptive thresholding and watershed algorithms, the plates separate. Where this is not the case they can be separated manually.

Variation in continuous phenotypic traits like shape or area of certain structures are difficult to quantify in a discrete fashion, e.g. with landmarks, because they are too complex or have no underlying assumption of homology.

Here, sticklback armor plates and their shape features are detected in a two-step process. First, a mask was set around the posterior region that contains the plates, which is then tresholded. Due to the red staining, the “red channel” contains highest signal-to-noise-ratio, and is thus used (specified in threshold). Then, the watershed algorithm is applied to the specified region to erode the area between the plates, which produces another binary image (fed to detect_contour). Remaining plate-overlap is removed with the edit_contour tool, and detect_contour is used a once more to determine the final plate boundaries.

In the second step, the configuration file is modified to add compute_shape_featues, followed by a “silent run” feedback=False. By running this second step only after the initial plate separation, the first step with the actual plate segmentation can be run much faster: depending on the number of objects in the image, compute_shape_featues can be quite computationally intensive, so running it after the final contours have been detected will speed things up. This is a useful approach also for other scenarios.

The watershed algorithm, which helps to separate detected objects into “peaks of wanted information” and “valleys of unwanted information”, is explained here: https://docs.opencv.org/master/d3/db4/tutorial_py_watershed.html

NOTE: These are the same images as in https://www.phenopype.org/gallery/project_2/ - reference detection and ID-entry are shown there and thus skipped here.